Dr. Young Seek Choue, President-Emeritus of IAUP and Founder and Chancellor of Kyung Hee University System, passed away peacefully on Saturday February 18.  We shall always remember Dr. Choue for his great knowledge and untiring life-long dedication to education and the peace movement.

Dr. Choue was born in Woon San, Pyungbook Province, Korea in 1921 and graduated from Department of Laws, Seoul National University in 1950. In 1951, he established Shinheung Junior College, and Kyung Hee University (KHU) in 1955.  Since then, he has developed KHU into a comprehensive educational institution inclusive of kindergarten to graduate school programs.

After successfully developing the Rural Enlightenment Movement in the early 1950s together with the faculties and students of KHU, Dr. Choue continued to initiate and carry out the following social programs and movements: the Better Living Movement, Rural Service Activities, Free Medical Service Activities, the GCS Movement, the World Peace Movement, and the Movement for Reconstructing Human Society. By doing so, he expanded and strengthened the function of the university to include social service activities as well as academic research.

Furthermore, to bring about academic development through friendly ties and mutual cooperation among universities and to promote world peace and human welfare through higher education, he proposed and co-founded the International Association of University Presidents (IAUP). Its inauguration conference was held in Oxford University, United Kingdom, in June 1965.

At the 4th Triennial Conference of the IAUP held in Boston, U.S.A. in 1975, Dr. Choue proposed “the Boston Declaration” to promote the GCS Movement in full and worldwide scale. The ultimate goal of this GCS Movement was to overcome the adverse effects of contemporary materialistic civilization such as disrespect for human dignity alienation of human beings; and to improve modern human society into a better and more desirable one by harmonizing the spiritual culture and the materialistic civilization.

During the 1980s, when the superpowers were competing in a massive arms race by producing innumerable weapons of mass destruction, Dr. Choue proposed the establishment of the International Day and Year of Peace at the 6th Triennial Conference of the IAUP held in San Jose, Costa Rica in 1981. He contributed greatly to promoting world peace by playing a pivotal role in encouraging the UN to adopt his proposal and promulgate the UN International Day (the third Tuesday of every September) and Year (1986) of Peace.

Dr. Choue received over 100 honors and awards from many countries and world organizations like the UN, wrote over 50 books including Democratic Freedom, The Creation of a Civilized World, Reconstruction of the Human Society, and Oughtopia, and presented and delivered over 120 papers and keynote speeches at national and international conferences. He has received 34 Honorary Doctorates from many world-renowned universities since the Honorary Degree of Doctor of Laws from Miami University, U.S.A. in 1959.

Dr. Young Seek Choue, the proponent and its first International President, was appointed as the Honorary President of the GCS International on November 4, 2006. 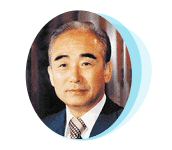