The Executive Committee of the IAUP was held in Casablanca, Morocco, hosted by Former President Mohammed Barkaoui and President Khalid Naciri of the University Hassan II, at the Hotel Hyatt Regency.

Excellent technical and administrative support was provided by the Staff of our host institution.

Higher Education in Africa was one of the main themes since there is a consensus that the key to helping Africa is to support education, and particularly, higher education within the continent.

A Conference on “Research in African Universities: Its Results and Impact in the Development of the Continent” was presented by Mr. Domingos da Silva Neto and Eurico Josué Ngunga, from the Ministry of Higher Education, Science and Technology of Angola, on behalf of HE Dr. Joao Sebastiao Teta, the State Secretary of Science and Technology of Angola. They focused on Science, Technology, and Innovation (STI) and their importance for the sustainable development of Africa. Dr. David Strangway  gave an update and motivating presentation on his proposal for Academic Chairs for Africa. Mr. Ahmed El Hattab, Director of Sciences of the Ministry of National Education, Higher Education, Professional Training and Scientific Research of Morocco spoke on “Research and Innovation in Morocco”.

The meeting also reviewed the program and preparations for the XVI IAUP Triennial Conference, to be held in New York City, June 17-20, 2011, presented by President-Elect Michael Adams. An intense work plan for the next Presidency was reviewed and discussed too.  This meeting brought together a good number of IAUP representatives from around the world, and some special invited guests, to discuss important issues related to present and future activities of our Association, from the perspectives of their respective institutions, countries and regions. 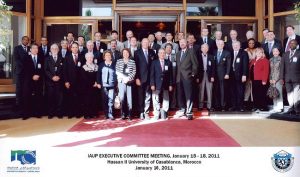