Mental health has become a major concern for higher education students and universities across the world, an ongoing  issue that has intensified during the last years defined by the pandemic with institutions struggling to keep pace with the growing demand of resources.

As Dr. Michele Nealon, President of The Chicago School of Professional Psychology, stated during the first session of the IAUP-TCSPP Webinar Series that began on June 21, titled “The State of Student Mental Health”, 70% of students experience a mental health crisis while in college.

The time of rapid growth and transition that many students experience during these years has become even more chaotic due to the effects of the pandemic, which increased isolation, household stress, and lack of access to resources, while leaving staff and faculty who have suffered from the same current issues unable to provide the necessary support for students when they need it most, explained the TCSPP President. 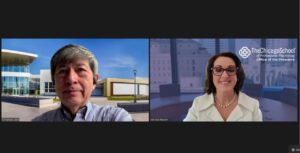 Current systematic challenges include: too few providers, too little training; a lack of diversity among mental health providers; inadequate, homogenous support for college students; strained support systems caused by the pandemic; and a disparity of access to virtual mental health resources.

In order to bring these issues under control, universities will be forced to rethink their approach when it comes to not only current students’ mental health, but also support for younger generations before they even set foot on a campus.

“The reality is that this pandemic will have ramifications in students for years to come”, said Dr. Nealon.

Awareness and partnerships with external actors can also provide a more comprehensive approach to address an issue that already existed and has now been exacerbated.

The conversation on Student Mental Health will continue with session 2 of the Webinar Series: “Meeting the Escalating Demand for Mental Health Services: How Universities and Colleges Can Shape the Workforce”.